When temperatures drop, we often receive calls from customers concerned at possible damage to their boats due to freezing conditions, when boats can become icebound on lakes and inland waterways. 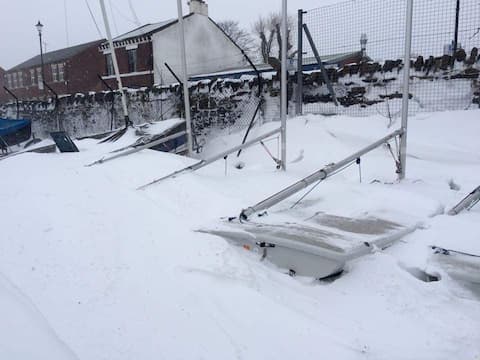 Last winter, the owner of a Birchwood 25 motor cruiser on Lake Derwentwater reported that ice at least an inch thick surrounded the boat and was creaking loudly. They had been up in the night trying to keep the ice broken but this became too difficult. As the steep slipway nearby was unusable due to the weather conditions, bringing the boat ashore was not an option.

The good news is that based on advice received from surveyors and others in the marine trade, ice, even when quite thick, is very unlikely to crush or seriously damage boats whilst moored.

Trying to move a boat in ice is more likely to cause damage, particularly if thick, as the broken ice could be quite sharp and damage gel coats. And of course owners should not risk personal safety in icy conditions.

Wooden hulls may be more susceptible to damage from ice than GRP or steel. In the past, caulking in the seams could loosen after thawing, resulting in leaks which could cause boats to flood and even sink.

Onboard heaters and running engines occasionally may help prevent problems but are unlikely to create enough heat around the hull to make a significant difference at the water line if temperatures are well below freezing.

Even ashore, boats are not immune to winter risks. Craftinsure has had claims where the accumulation of snow on buildings caused the roof to collapse on top of the boat inside! Snow should be cleared off boat canopies and awnings when possible as again, large accumulations could cause damage.

A more common problem following long spells of cold weather is damage to water systems, seacocks and machinery. Winterisation of engines is obviously important as frost damage is a major risk unless the manufacturer's recommendations have been followed. Most insurance policies only cover frost damage to machinery where owners can show this is the case. Any fresh water systems should be drained unless the boat is kept heated.

As and when the thaw finally arrives, owners need to check their boats over carefully, and in may need to prepare for the additional risk of damage due to floods as water levels rise again.